I would say that was the theme of this week.

We had so much fun last Sunday celebrating Sawyer’s birthday.  Tatum K had started running a fever off and on.  When her fever went up, it knocked her out.  But then when Motrin kicked in, she was bouncing off the walls.  So we didn’t think much of it.

Little did we know.

Monday evening was a nice night celebrating Cooper at the GCS Football Banquet.  It’s hard to believe he’s already completed his Freshman football season!  AND, we had the BEST barbecue cooked by his Coach.  Tatum K continued to run fever off and on.  And I noticed by the end of the evening, my head had started pounding, and I felt so, so tired. 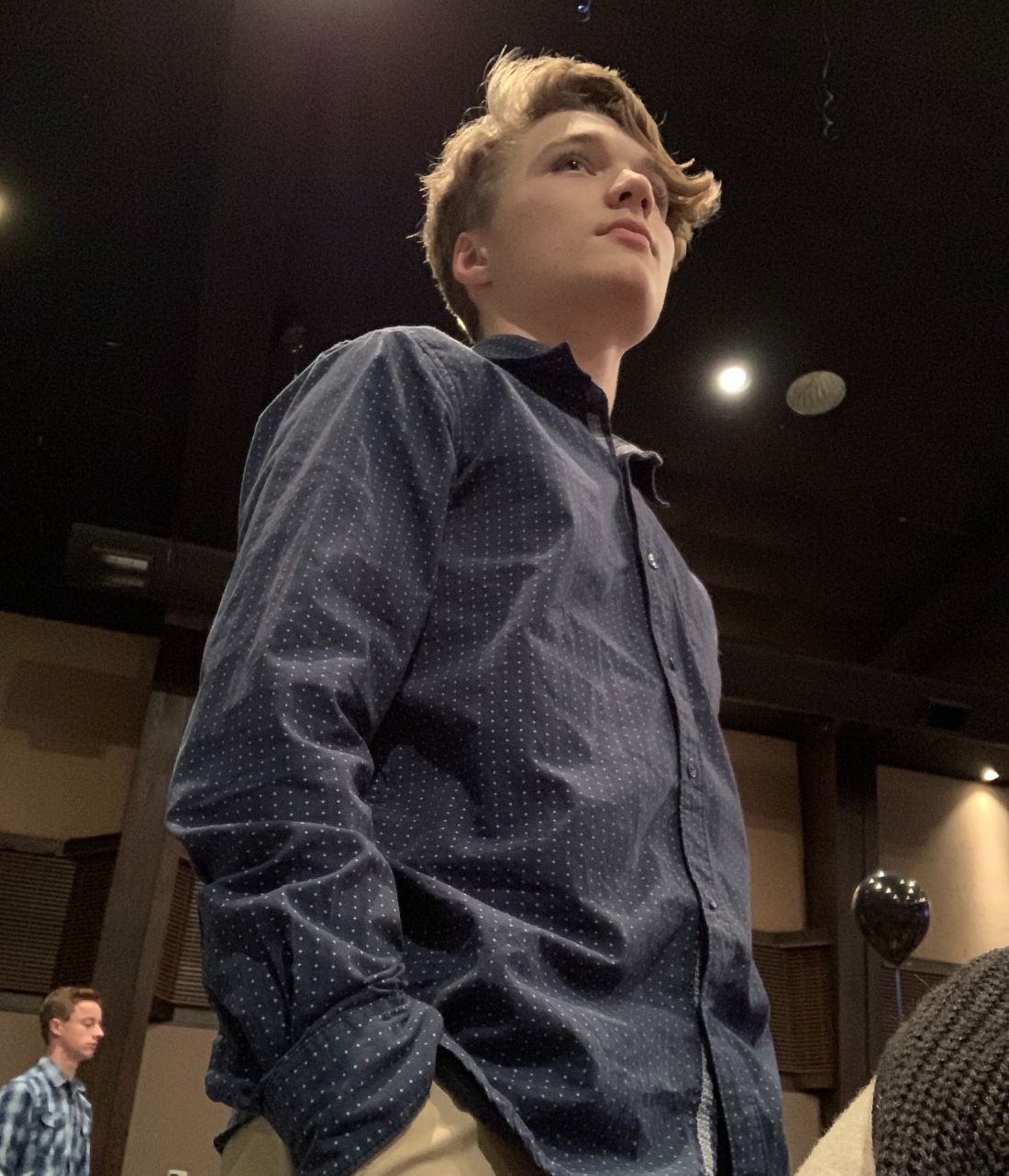 Tuesday morning, I woke up feeling like I’d been hit by a train.  Tatum was still running fever, and Gavin was barking like a seal.

Wednesday, Zoe got it.  Then Thursday, Cooper.  And Tatum K and I never got better.  Only worse.  We all just laid around, moaning occasionally.  Washing hands and reapplying hand sanitizer until our skin was raw.  Tatum didn’t eat all week.  Maybe 4 carrots and few bites of Fruit Loops.  Trust me, I tried everything.

By some miracle SAWYER DID NOT GET SICK!!!!  And neither did Samantha, Kora, or Josh!  GLORY TO THE LORD!   (Colton and Carson Grace don’t know how very blessed they are not to be living at home this week!)  I honestly cannot remember EVER being this sick.  I get colds every year: it doesn’t matter if Mom gets sick – life still keeps rolling and I have to roll with it.  With whatever-in-the-world-this-was, THERE WAS NO ROLLING.  And to top it off, Tatum rested so much during the daytime, she stopped sleeping at night.  EVERY. NIGHT. THIS WEEK, she was up a MINIMUM of 10 times.  No sleep for sick mama.  No wonder I couldn’t get better.

So here we go!

~ for the delicious BBQ at the football banquet.

~ that I had been able to get the house decorated for Christmas BEFORE the sickness hit.  Not only would it not have gotten done, but it made the house cheery and festive to brighten up our hard week.  Our house was just MADE for Christmas.

~ for the children’s sweet prayers for their Mama and their siblings.  They were the absolute best sports on the planet, and did their best to help around the house.  Sawyer was devastated that he couldn’t hug me, so he had to make due with hugging my leg.  They all offered so much grace and kindness to their sickly and not-very-gracious mama.  I tried not to be grumpy, but failed miserably.

~ for good snuggles from poor little Tatum.  It was clear how awful she felt – she was not her spicy self at all as the week progressed.  All she would do was croak, “Mama, I lay wif you.” 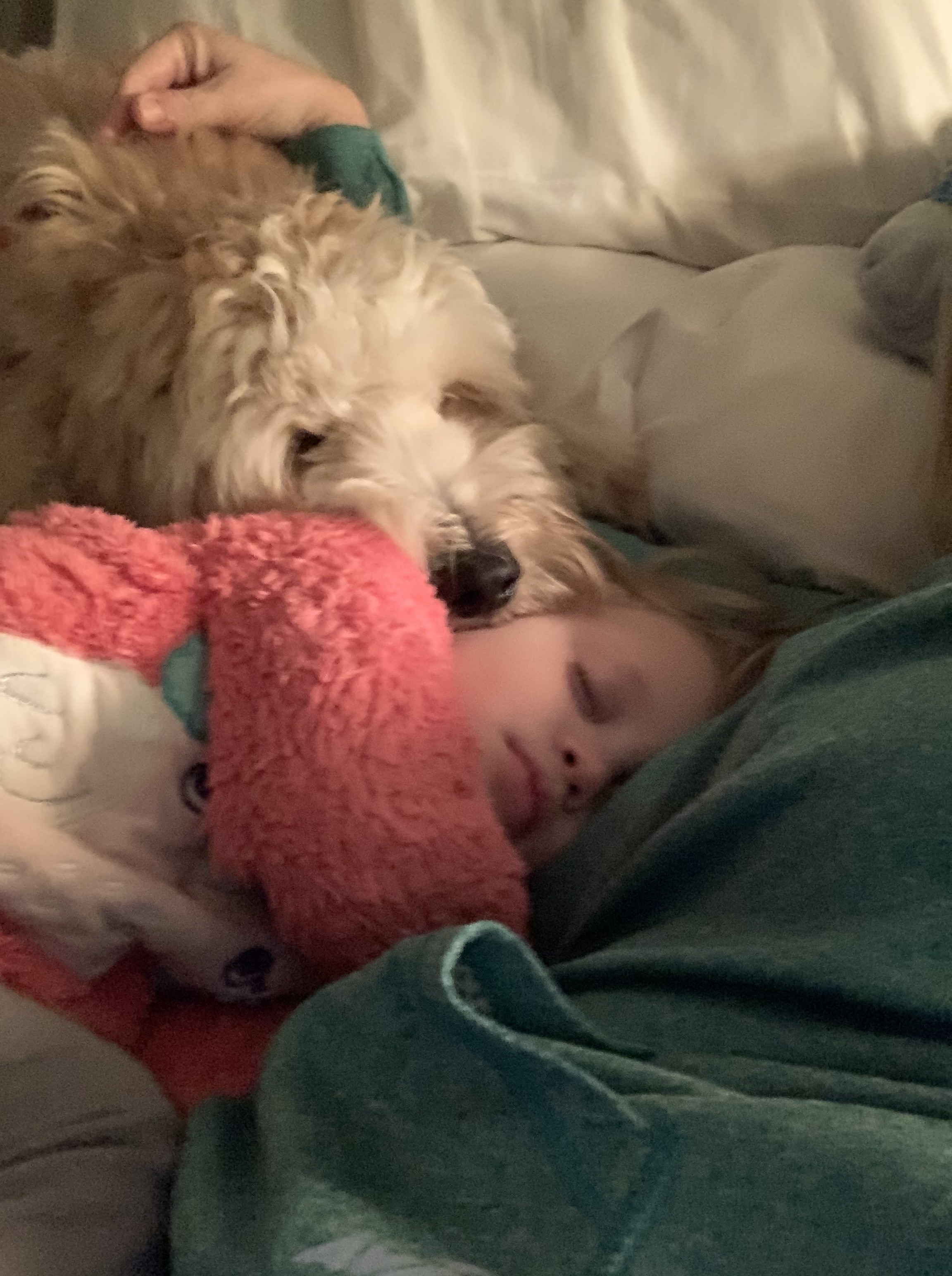 ~ for a FEAST delivered to our doorstep!  When I opened the door and saw all the tasty food, I could hear the choirs of angels singing!  Slim Chickens never tasted so good!  THANK YOU Karen!!!

~ for “A Charlie Brown Christmas.”

~ for the most wonderful Advent Devotional.  Even as sick as most of us were, I’m grateful that we chose to end each day on the sweetest note.  We ended every single night  with the Word of God and pointed to Jesus.  That’s really the only thing I got right all week.  But thankfully, it’s the ONLY THING that matters.  Glory to His Name.  You can find the devotional here.  (Thanks so much for sharing it, Jen!)

~ that Josh was able to attend (and video for me) Kora’s 4th Grade Colonial Trade Days presentation, where she portrayed a Leather-worker.

~ for Bear being the most adorable and photogenic Christmas dog ever.  (And for Tatum who had to show me that she could sit as nicely as “Bear Boy”). 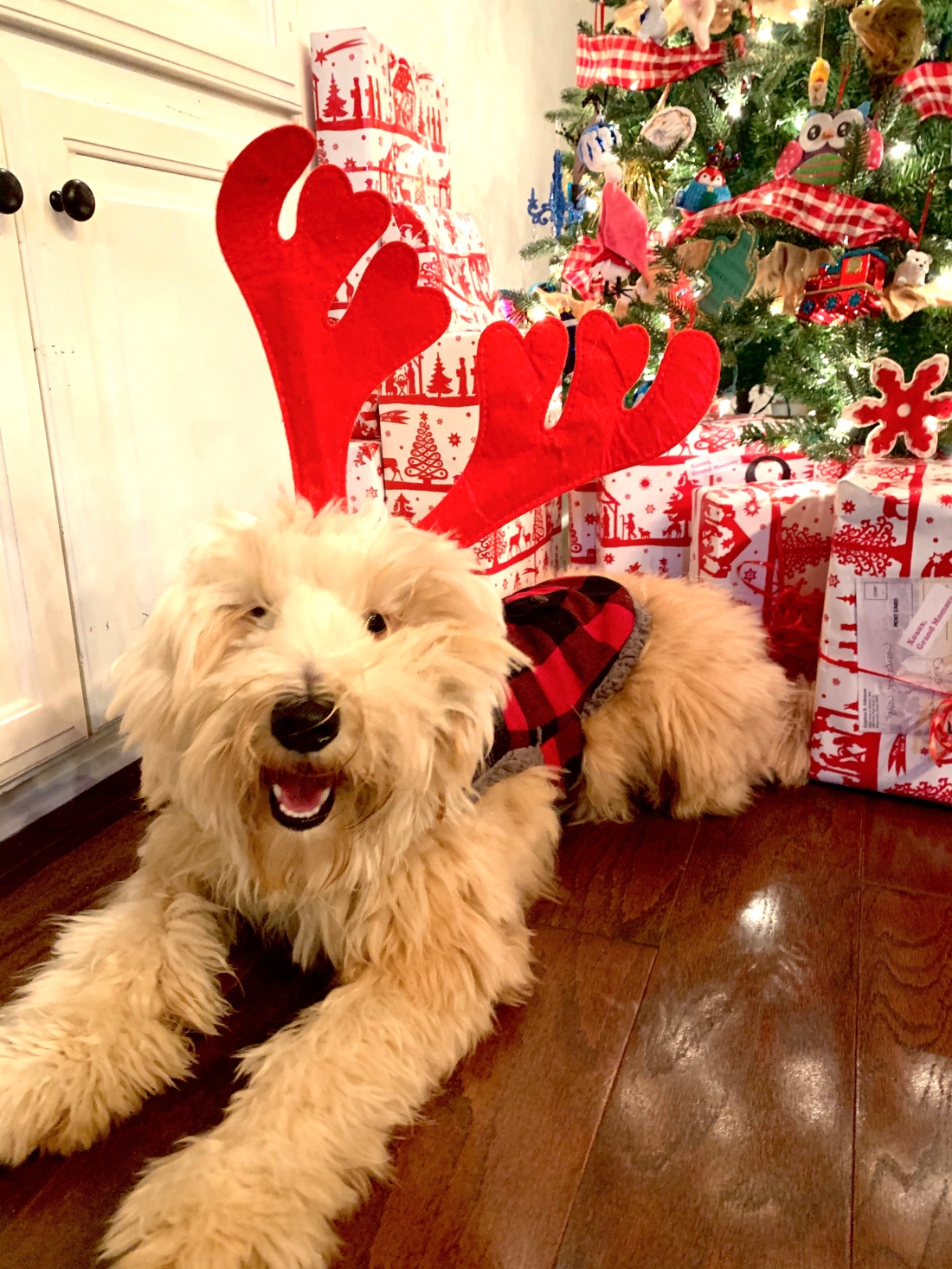 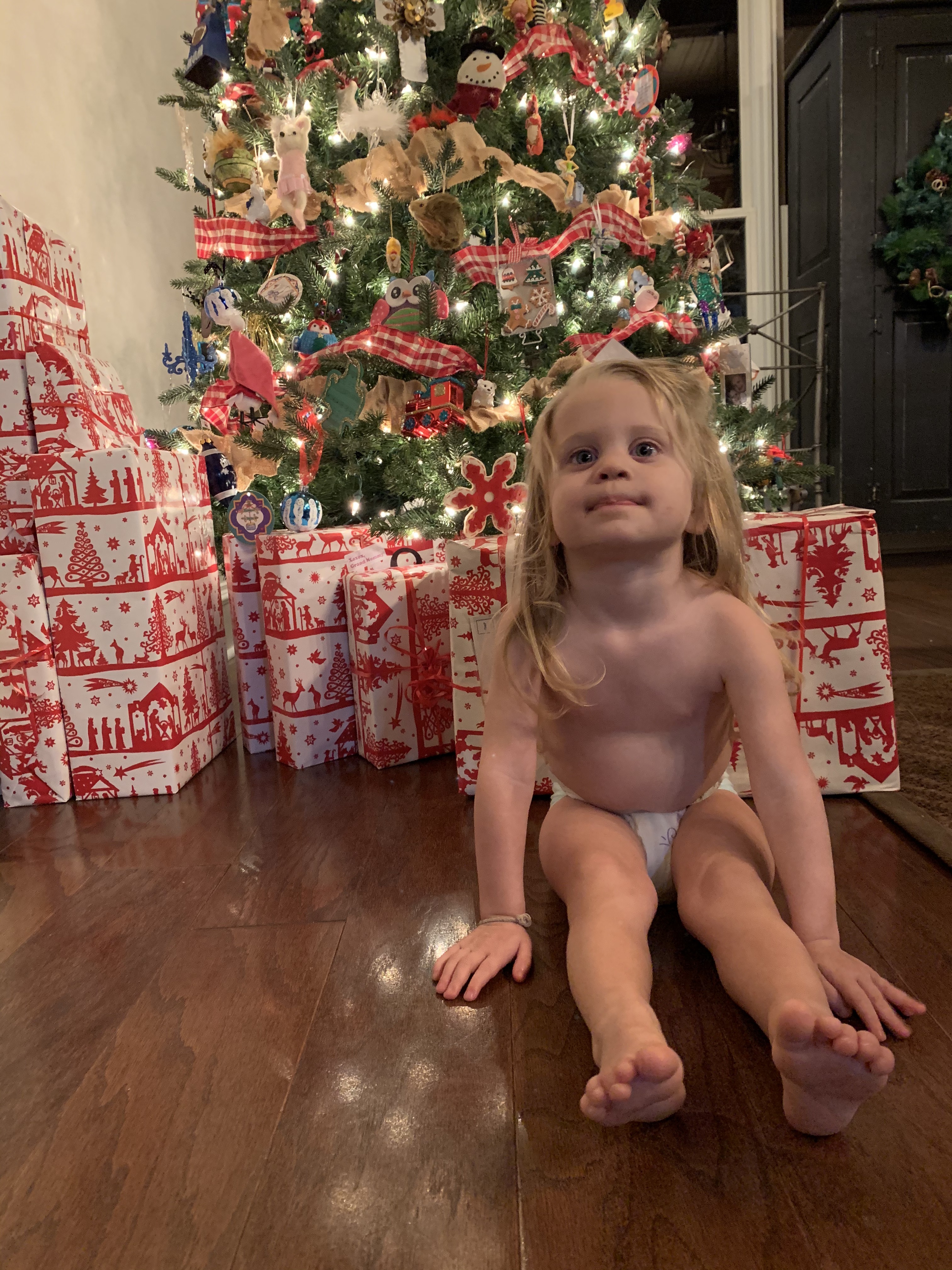 ~ for my amazingly talented, creative, and hardworking husband who built signs for our orders this week AND created several new items available from Giddyup & Whoa.  I just love everything he builds!

~ for HEALING!  As of Saturday, we are all fever-FREE, and on the road to feeling better.  I still have ZERO energy, but it’s such an improvement from how I did feel.

~ that Josh and I are both up to date on our tetanus shots!  I stepped on a rusty nail on our street that pierced my foot through my sneaker, and Josh narrowly missed cutting off his thumb, but sustained a wide flesh wound.  Thank You Lord, for Your MERCIES!

Have you used the feature on Spotify that tells you your “Most Played Song of the Year?”  So many people have been sharing it, I was curious.  I can’t even remember what it told me for 2019, but then the feature went backward several more years.  When my “Most Played Song of 2015” popped up, it took my breath away.  “Bye Bye Bye,” by NSYNC.  For those of you who are new here, that was Sawyer’s favorite song when he was a baby, and I played it for him OVER AND OVER in the hospital.  2015 was a really hard year:  we started January in the ICU after a terrifying narcotic reaction, and then later that year we had lots of long hospital stays due to side effects and infections. BUT GOD. Gives a little perspective on one week of RELATIVELY MILD illness in the comfort of my home.  (Oh, and my “Most Played Song of 2016?”  “Rise Up,” by Andra Day.  Thank You Jesus!)

I am ready for a FRESH NEW WEEK!   How about you?

Thanks for giving thanks with me!

“But you, Lord, are a shield around me, my glory, the One who lifts my head high. I call out to the Lord, and he answers me from his holy mountain.” (Psalms 3:3-4)

Just a wife and mama thankful to be saved by grace. View all posts by Heather Rucker